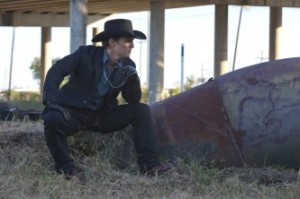 Warning: The film described here contains images of nudity and graphic nature that will offend and upset certain members of the audience

What you are about to read: I intend not to talk about the plot of this film as there are enough sites out there that can do that, this is just my experience and observations

In a screening room in Edinburgh, William Friedkin is sitting politely answering questions from the audience around one of his films. Unknowingly to any of those who planned to see his latest film, Killer Joe a comedy-thriller, the following night that he would commit a crime in full view of that audience. William Friedkin assaulted the audience’s senses by sickening and humouring them. It looks like he has managed to get away with it.

It was too bad on my part that I was unable to attend that Q&A session missing out what would have been a great experience. Though I was able to attend the opening film as part of 2012’s Edinburgh International Film Festival and this was the beginning of my film a day that I took time off from work for.

Before entering the Festival Theatre in Edinburgh, I had my doubts about whether I was going to enjoy this film or not. It felt like some bad omens were creeping about as I had planned early for the events and already having to reschedule with last minute additions and cancellations. The screening was running fifteen minutes late did not aid my mood. When I got to my seat, the remaining audience filled the row wedged me in leaving me little room to move around while plonked on a tight wooden seat.

When artistic director, Chris Fujiwara, came on stage introducing William Friedkin, the director, and Gina Gershon, one of the stars of the film, with a little introduction speech. Many other audience members managed to grab a few snapshots for capturing the night out with Gina returning the favour back. In my wedged state I was unable to get access to my camera to grab a memento for myself, knowing that I had missed another opportunity I had become irritable and the film hadn’t even started.

On with the show
It takes little while for the film kick in still leaving me to consider where it was going. It is not until the introduction of Matthew McConaghey’s character Joe by the dog’s silence that I began to take real notice in the worth of this film.

What follows are various threads of scenes that make audience members’ laugh one minute then groan in disgust the next. Included in what filmmakers and audiences will refer to as the infamous chicken leg scene that brave Gina Gershon went through may even turn some people to become vegetarians. The film weaves well with an ending that has deliberate loose threads with audience members asking if Juno Temple does or does not (you have to watch the film to get what I mean)

Throughout the film, Matthew McConaghey has the most powerful role along with good lines. However, it must be said that Emile Hirsch (young drug dealer), Thomas Haden Church (the father), Gina Gershon (stepmother) and Juno Temple (the innocent sister) each bring their own characters to life.  They do not play the stereotypical redneck trailer trash that Hollywood has shown on screen in the past, they play each of their characters as unique individuals.

William Friedkin brings out Tracy Lett’s play splendidly that only an experienced director could handle. In his opening introduction, he mentions it is a film containing sin and redemption (plus a few other things that I was not able to get down thanks to being wedged) and it is. He also does something that many filmmakers have forgotten and that is to get a film to engage with its audience – regardless of it being a good or bad engagement.

One of the great things I liked about this film is the way William Friedkin creates with focus on acting, scripting and tight camera angles. He, among other directors, proves once more that in order to make a really good film, you do not need big budgets and CGI effects for a film and 2D just works quite well.
This is the sort of film…
In his opening statement, Chris Fujiwara referred that this film is the sort that is designed for film festivals and I must agree after seeing it. I would also want to extend his comment and state that this is the sort of film that will be played in independent cinemas years and decades to come as it is built to last. This will be thanks to its recognised status amongst only the most mature-minded cinema-goer and filmmakers who will whisper it around in close circles inviting in only those that get it.

It is also a dangerous film, as it may inspire younger filmmakers to attempt to imitate this film without realising the pitfalls and dangers they face. It is only after building up enough experience in the industry that they should try and make this sort of film.

One of the other items I like about what William Friedkin has done is making it difficult for lazy critics who refer films to being like so-so’s film is that this film is unique and falls into no specific genre. If anyone tells you otherwise, they are a liar and deserve to be fired for not putting their work into their job.
Fancy seeing a film tonight…
Before you go and see this film with friends, make sure you bring the right group of friends with you. It is important that you take people that really appreciate goods films and is not for a cheap laugh. Even though at the start Gina Gershon told us it was okay to laugh during the film, it is when you laugh that is important. I learned that plus a few other things about the people that sat around me through their reactions.

In the opening scene when Gina’s character opens the door, I heard one low snigger in the row behind suggesting an immature mind sneaked into the theatre.

A scene where we see Thomas Haden Church’s character come into the pizza parlour, he picks up a bottle of beer and starts to drink the dregs from it, I heard the sound of disgust behind me.

We all laughed at the dialogue in the build up to the infamous chicken leg scene before Matthew McConaghey punches us, the audience, into shock through Gina.

As I said this is sort of film you have to really appreciate if you like that sort of thing. If not, then it is best to stay away.

Not perfect
Despite talking in favour, I must state that this is not a perfect film. I felt there were scenes in there that did not need be to done and perhaps would have worked better in an alternative way. Certain scenes left me uncomfortable and did disgust me which I not state in this post.

Nevertheless, William Friedkin has done what he has done and it is done well.